DIY foods for the reef aquarium.

South East Queensland Marine Aquarium and Ocean activities Forum :: SEQMAOAF :: Do it your self for reef aquariums.

DIY foods for the reef aquarium.

Important-when collecting,always leave the area you collect in the way you found it or improve the area before you leave it!!!

Benthic invertebrates are found in and on the floor of the ocean in the top layer of any grit or rubble, plus you will find them (you wont see them) on chunks of rock or dead coral and sometimes on marine algae.

You can get varied benthic invertebrates via shell grit/rubble from depths or in rock pools or just out off the beach via raising this grit/rubble into the boat or just scooping some grit/sand/rubble still with water at the shore line and pore it into a colander and shake the rubble/grit around with a slight amount of marine rubbish going through with all the benthic invertibrates into your bucket,then pore the shell grit/rubble back into the water.

It's that easy to introduce benthic inverts and other planktonic life forms for your mandarin fish, wrasse and so on to have in the aquarium for your aquarium life forms to feed on.

Planktonic life forms can be found in patches of algae that is always bellow the lowest tide mark, very gently gather it into a bucket and shake the bucket quite roughly and pore the water through the colander into your bucket.

These ways of collecting will net you fresh planktonic creatures, normally this way, only good ones, and plenty of benthic inverts.

Sponges, for these you can turn over rocks (always put them back the way they were),or at a tide of .25 and below find the orange species that looks like a brain in pattern and shape, this one does well in the aquarium and is the only one that can handle being out of the water for a time.

Home made reef aquairum food that will sustain all corals other inverts,filter feeders and most fish.
Firstly prepare a frozen mix of-

One third cunjevoi meat,collected limpets and green muscles.
The rest is some frozen small krill, any types of frozen plankton,frozen micses shrimp,frozen lobster eggs, dried frozen krill, spiralina powder, no marinara mix from super market, some sushi wrap-nori,two heaped tea spoons of reef salt per cup of blended food to avoid bacteria developing when foods stand for a time, than any other none predatory marine meats and marine algae other than caulerpa,added to this mix.

Blend all this from liquid to 2 to 4 mil particles for all forms of life.

Freeze this in ice cube trays than put the cubes into a plastic freezer bag and store for future use,make a lot as it will last years in sealed plastic bag to prevent drying out while frozen.

A few more things can be used for extra health, leave some sushi wrap and a piece of cunjevoi, or an opened muscle or crab dangling in the tank for fish to graze upon,but only for a few hours before removing I don’t use these things now but I have and they are of a benefit!

This is a way to have food on hand that feeds all reef tank dwellers and easy to use for you or any one looking after your reef aquarium!

Add one tea spoon per cup of good quality marine aquarium salt for less chance of bacteria in food,this is the most important stage of the mix.

This not needed but you can add two tea spoons of flake food, any high quality fresh or marine flake food.

Frozen cubes of food, half of one in each bottle.

Cut cube, half for each bottle.

Add part of cube and once thawed cut with knife in cup water.

Mix ingredients with a sharp blade making sure the particles are made small.

Pour cup into its squeeze bottle.

A shake quite violently than add a very small squirt to tank, I do it 10 to 20 to 30 times a day,it doesnt matter how many times you ad it as it is a small un poluting amount and you want it to mimic plankton doeses,plus once when lights go out do it again.

Because there is an abundance of salt in the this food,it will last for a few days once thawed with no bacteria build up that will kill small fish and harm corals.


Cunjevoi-Pyura stolonifera or a Chordata Ascidian is a creature between creatures you might say, it is an animal but falls into no family of actual animals, though it is a sea squirt, it also acts like an algae?

These creatures oxidise some of the nitrite cycle, extract planktonic sized foods to sustain itself, so obviously there is some symbiotic actions going on with in these creatures from what I have observed as to the types of regions they come from as well.

All the types of fishes that feed and thrive on them do extremely well with colour, body mass and resilience to parasites.

All coral eating and all algae eating species of fish do very well on them and all other fish an inverts will eat them as well, that would mean they are high in protein, high in similar tissue to algae and the fluids excreted by them when opened attract fish to them readily this would also indicate high protein levels.

They exist at their best in high nutrient level waters like the mouths of estuaries and in wards to where the salinity doesn’t drop much and wave motions keep them clean of annoying algae that grow over them.

They are found near most shorelines on rocks and behind islands unless there are sufficient nutrients in the area, than they will be anywhere, even in open ocean waters if nutriant rich waters can reach them.

The cunjevoi does prefer cooler not freezing waters, so closer to the equator could be lower numbers than more so southern waters.

When you collect some cunjevoi for fish food, when walking on an area of lumpy areas of rocks at low tide that are not hard, as they squirt up your leg, you are standing on cunjevoi.

With in the lump is a meaty looking mass; the best way if you do not take the whole lump off the rocks is to cut around the mouth at the top of it out to the sides like you would a capsicum to remove the seed and top.

Pull on this after the cut is made and out will come what looks like a heart, this is the flesh of the best form of marine fish food you will find and good bait on the line as well!

For a good over all fish food, blend it up with a good marinara mix, powdered spirileena, some good freshwater flake food, frozen krill, than fish, corals, every thing will exist on this mixture nicely.

The name of these creatures is said to be from an aboriginal name for them.


Best spots from Bris for collection of cunje is the south port seaway just in from and around the concrete platform the divers use to get in for a dive and out to sea along the wall at a low tide of lower than .40 at the Brisbane bar size, the tide at that part of the sea way is 50 mins earlier than the Brisbane bar time.

On the beach side of the seaway wall at a very low tide one hour and thirty mins earlier than the Brisbane bar times has exposed cunjevoi lumps on the rocks to collect and any where like these spots along the coast at a Brisbane bar tide size of les than .40, they will be exposed for levering off or cutting off the rocks.

Open them up and use all the insides.


This is a pic of it under the water.

Each one of those dark star shapes is a mouth for each individual cunje creature,they live in colonies. 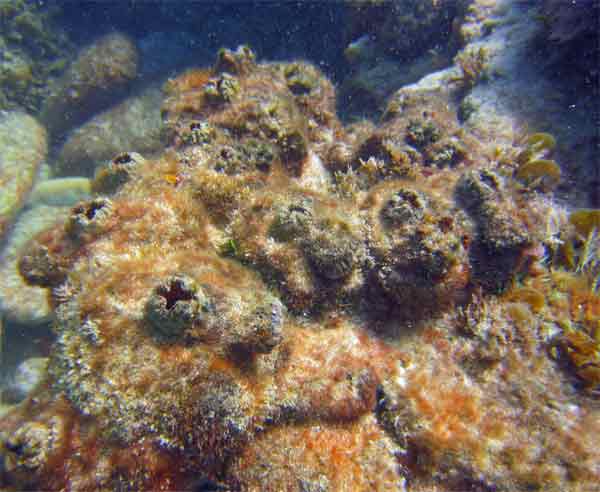 This is how to open cunjevoi for aquarium food needs.

South East Queensland Marine Aquarium and Ocean activities Forum :: SEQMAOAF :: Do it your self for reef aquariums.