Wrasse found near Brisbane in SEQ.

Wrasse found near Brisbane in SEQ.

The following are old pics of wrasse common here in SEQ and some of these photos of wrasse are from along time ago which means some of these wrasse may be classed as a finfish these days, making them illegal to take under their legal size. Check with Q fisheries to be sure.
Wrasse regulations.
http://www.daff.qld.gov.au/fisheries/species-identification/reef-fish/wrasses

All wrasse at their most harmless, will hunt and eat very small fish and invertebrates and possibly jump out of the aquarium!

Pseudocheilinus hexataenia-pygama wrasse.
Reef safe.
Very common in SEQ,though these fish tend to hide in and under stag acropora which makes it hard to see them and catch.
Susceptible to predation and will feed easily on most aquarium foods offered up.

Anampses neoguinaicus or china wrasse.
Reef safe.
Very common in these waters and quite easy to keep until large and they tend to eat your inverts such as shrimps and tube worms.

Halichoeres chrysus-banana wrasse.
Reef safe.
A very common wrasse in the south east and quite easy to have successfully in a reef aquarium.
They bother small inverts and maybe tub worms, a part from that they will eat any marine meats and standard fish foods you may use. They are found in waters from 3 feet to100 feet.

Gomphosus varius-birdnosed wrasse.
Suited to predator tank.
Quite common in SEQ and this juvenile is an easy fish to keep.
Not small invert or small fish safe.
Juvenile.

Macropharyngodon choati or choats wrasse.
Reef safe.
Endemic to Auz from Coffs harbour to Midway on the barrier reef, very common on the Queensland's sunshine coast.
Reef safe and a very easy to keep wrasse with limited other wrasse species and these fish require cool waters at no greater then 25c.
This species grow to 40 centimetres and will feed on anything invertebrate you give them like fresh worms, crustaceans and molluscs and requires semi cool water to a max of 25c.

Labroides dimidiatus-cleaner wrasse.
Reef safe.
Common in most of the worlds oceans and if the one you get is free of stress and from an area of the ocean that is very low quality,they will do well in an aquarium.
These fish do not eat toxic white spot or velvet,just the dead skin as a result of damag and large parrasites.

Coris picta or comb wrasse.
Semi reef safe.
A very common wrasse on most of the east coast to the early parts of the barrier reef being that it is an Auzy endemic fish.
An easy wrasse to keep though they wiil eat most inverts(shrimp,crabs)they tend to get quite big as an adult.
Adult 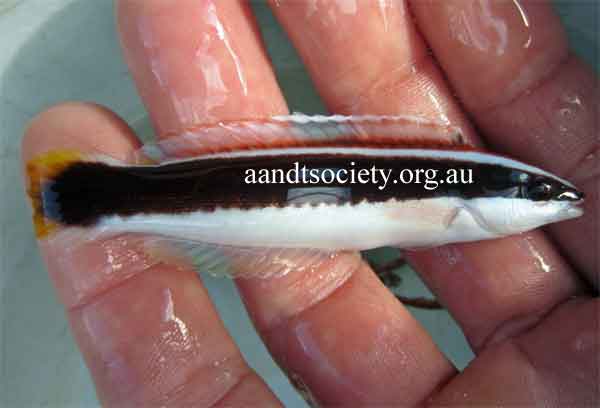 Coris pictoides wrasse.
Reef safe.
Not common in SEQ and except for small invertebrates they are quite reef safe.

Coris aygula or clown Coris
Suited to predator tank
Not overly common here in SEQ,though each year we find a few.
This fish attains a size of 40 centimetres and can be quite aggressive to small fish and mobile inverts.
Coral safe and feeds readily on most marine meats.
Juvenile.

Coris gaimard or clown wrasse.
Semi reef safe.
Very common in SEQ at depths from 2 to 30 metres of water in stable estuaries near the open ocean and abundant at protected and open ocean reefs. They can grow to a length of 40 centimetres.
Coral safe,though they will attempt to eat any of your crustaceans and tube worms.
Juvenile.

Macropharyngodon negrosensis or black leopard wrasse.
Reef safe.
This species prefers cooler then average aquarium waters for a long life.
The negrosensis is the most common of the black leopard wrasse, the other is the kuiteri.
The negrosensis is the larger of the two and grows to a maximum of five inches.
The feed readily on most small mobile benthic inverts and can be made to enjoy made up foods quite easily when the foods are based on mollusc and crustacean life forms..
A harmless and very common fish to depths of 1 to 30 meters of water in SEQ

Macropharyngodon meleagris- leopard wrasse-adult.
Reef safe.
Very common in the southeast,more so as a juvenile.easy to keep and not to bad with inverts.

Novaculichthys taeniourus or rock mover or dragon wrasse.
Suited to predator tank.
Common in SEQ in open ocean waters of stable salinity.
Very aggressive wrasse as it heads to towards adult.
Juvenile

Anampses Femininus or South Seas wrasse.
Semi reef safe.
This beautiful fish is the number one escape artist!
They eat small crustaceans, muscles and any benthic life generally; they are common in the Qs southeast to Sydney out to Fiji. As juveniles they are found from 40 to 100 feet of water and as adults they tend to move a little deeper.
The territory of these fish is in an oval shape on average and begins at roughly 20 feet across at the narrowest and expands to a little more then 80 feet as an adult. If there is no other anampses wrasse near by, they may have a larger territory. Until this wrasse attains adult hood or paris up for breeding purposes they are not greatly territorial.
As a juvenile they are never far from their sleeping patch of sand they burrow under at night and it’s always against a large rock.
They require the same conditions as the chaetodontoplus conspicillatus, latezonatus amphiprion, Coris picta, merdithi-personifer and other endemic species that can not stand ocean temps much above 24c.
Most are born female and the ones that become males are totally different in colour to the female that remains the signature colours that all femininus start with. The male attain their sex change just over an inch in size and begin the colour change from around 7 to 8 inches in size and a strong territorial attitude begins. They pair up between one and two inches in size and can breed from 6 to 8 inches in size, still with the original colours for now.
· All of these endemics are susceptible to alkalinity changes and prefer salinity no less then 1.024.
· Ultra violet radiation from the suns rays in shallow waters and from resistance lighting will cause cancers mainly on the head and eyes use LED lighting for their best results or weak tube lighting.
· High oxygen levels are a must for these fish or they will stress and die.
· They are reef safe but not for small crustaceans and tube worms.
Some would say this is the prettiest fish in the sea. 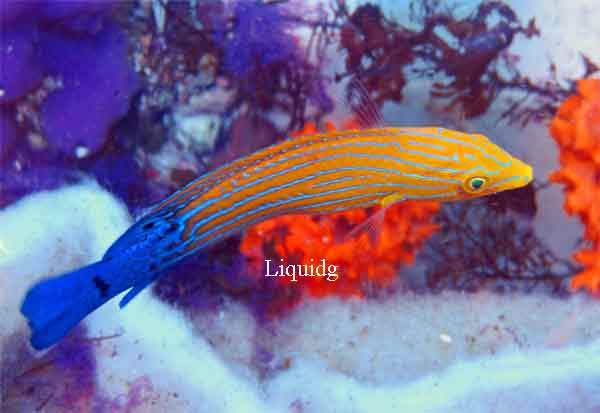 Thalassoma nigrofasciatum or black barred wrasse.
Suited to predator tank.
Very common along the east coast of Auz and as with all Thalassoma, very aggressive as they age.

Hemigymnus fasciatus or thick lip wrasse.
Suited to predator tank.
Extremely common in surge areas of in shore reefs.
Though this wrasse can grow to a very lage size it is quite a harmless fish at juvenile and adult.
Eats any and all marine foods and may bother corals.

Hologymnosus annulat or cigar wrasse.
Semi reef safe.
There are three colour variations of this wrasse being female and male and one other for either.
Relatively harmless.

Pseudojuloides cerasinus.
Semi reef safe.
A relatively common wrasse in the south east.
This can be an aggressive fish and also easy to keep with a diet of mainly small inverts.