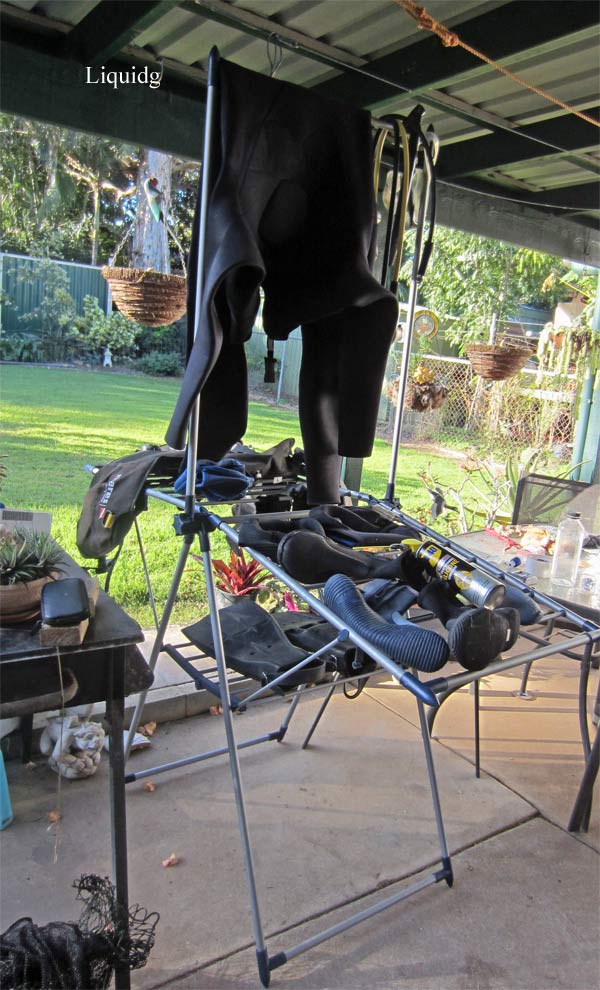 Its best to speak to some one that knows sinus/antrum equalising really well "one on one" if you have any issues with this and practice with their help.
If after that, it does not come easy, then you have a physical barrier.
Hopefully just a short term mucus issue, you know, snot, lol.

The mucus is a histamine reaction, we make this to flush out what our bodies perceive as dangerous to us, or just irritating.
These can be dust, micro bugs, plant pollen, seeds, bacterial or viral issues or allergenic reactions, any one or all resulting in raising mucus levels in your maxillary sinuses or antrums.

In my youth I had sinusitis off and on from 14 to 21 years old, this made it so hard to surf and dive giving me pain in firstly the forehead and my ear drums.
So to start getting use to relieving the pressure, that is from the water volume/weight pushing onto and into you, try the old hold your nose squeezing both nostrils closed and close your throat valve, then try to force air through your nose.
That air should pass through to your sinuses behind your eyes, to behind your ear drums.
It should make a noise of some kind like bubbling sounds or what ever, then make a swallowing motion, if that is hard, have a drink while you do this and drink, then swallow.
The sound of the actual water being swallowed will make it hard to judge the resulting noise with in your antrums, but it will get easier.
You need to hear equal sounds from both sides of your sinuses, if not equal, you are a bit blocked up with mucus in one side more then the other.

A nasal spray will help with in an hour to a few hours especially anti histamine substances.
Do not use anti histamine products unless you need to, these may also reduce the production of mucus through out your body that are essential to day to day life, like the mucus that helps move waste through our bowls, reducing this action may increase the chance of bowl cancer.

Practise these equalising actions while watching tele or anywhere really and you will hear those sounds and know really well as to how well your sinuses are allowing good equalising, then in time it happens naturally for you with out thinking about it, unless that day you have a histamine reaction.

You see a cold is the onset of a viral infection that sets up in your sinuses that you breathed in at some stage.
Your body reacts as a histamine type of thing trying to flush out these nasties, then the mucus with bacteria from the days breathing and those virus all runs down your throat, especially when we sleep causing a saw throat to a throat surface infection and in that mucus is the viral life forms along with heaps of bacteria that gets to your lungs then you begin coughing and so on, leading to potentially, at its worst, pneumonia.

It I am blocked up while diving, I take my second stage out of my mouth "in the right ways", "because this can be dangerous" and grab my nose to equalise, but normally just moving my jaw in a sort of swallowing motion equalises the depth change that I am going through, this moves the air in my sinuses as I head down while diving or free diving giving me equal air pressure as the air in those antrums gets compressed as I go deeper.

Long term cool water divers get a swimmers ear due to bone mass increase from cold entering the outer ear bone and the bone reacts each time.
The bone layers over its self and in time then those areas trap water and pores open and bacteria from dead plankton as such enters the flesh.

Both my ears were operated on ,one with semi circle cut at the back of my ear and lifted off and bone ground away, the other in through the ear to keep this at bay, scares behind one ear scares in the other.

The only common issue is blocked antrum, very easy to tell if this happening, i had it two weeks back from the flu, i took the chance and went in anyway.
My new inflator hose failed and had to kick like hell to reach the anchor rope, no big deal but once i got there extreme pain and dizziness set in and had to close my eyes or i would throw up in my reg.
With in 1 to 2 minuets hanging there, the squealing started in my head as the pressure equalised and after a little while i could tell which was was up and no chucking, lol.
In extreme situations like at deeper then i was, it has been known for the pressure squeeze to explode the tiny rear nose bones into the brain area killing the diver, two divers so far in all these years.

One guy i knew panicked as his mask filled with blood from the sinus squeeze, he cut himself real bad from panicking as he tried to get out on the rocks.
If you sniff real hard and you feel any pressure around your forehead, you are taking a risk that if you panic under water, you will endure pain or potentially serious issues!!

When skin on hands and so on becomes wrinkled.
Never compare wrinkly skin to anything, it is a natural function so we can grab hold of things while skin is wet, that's why our skin does that once wet for some time.
.

Once you use a large spanner to get your tank valve out, as you hold the tank either on something soft on the floor and maybe sit on it or between your legs, tap the spanners end with a piece of timber or anything but steel to undo the valve, then get a small powerful torch to just check your tanks insides and the thread for possible cracks. 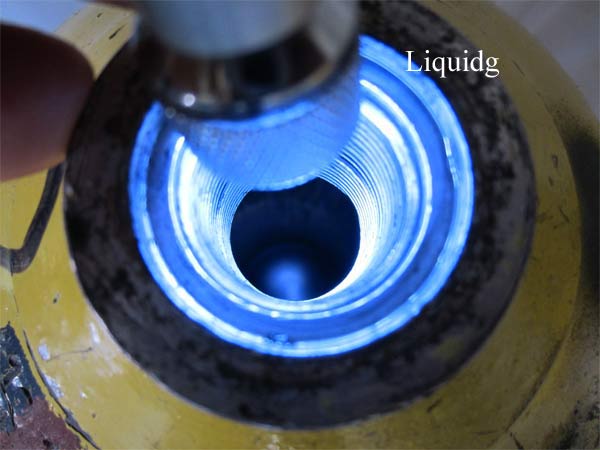 Take your valves a part setting all parts in line as they came a part so that they go back the way they came out.
All metal needs to be put in vinegar for a couple of hours to get rid of corrosion.
Clean everything thoroughly and wipe food grade silicon grease thinly over all parts and threads including O-rings.
Two parts of your tanks valve need to be very tight, that includes the burst disk assembly.
This pic shows contents valve and tank valve parts. 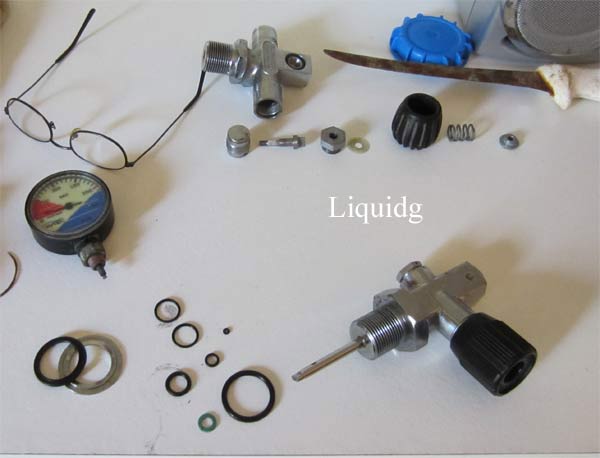 The contents gauge O-rings replacements and corrosion removal.
Take any and all O-rings to the local bearing place to get copied, they sell all O-ring sizes!
These two pics are of the two main style of O-ring seals in contents gauges. 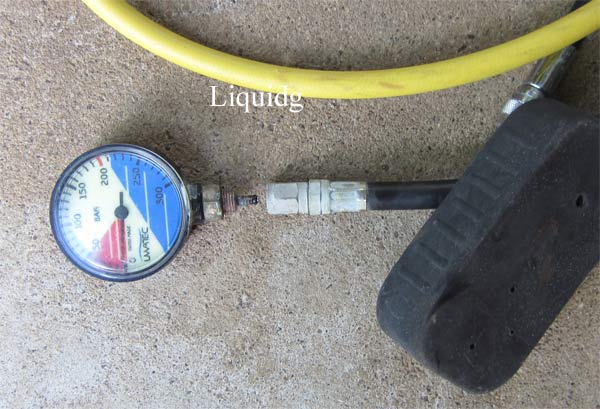 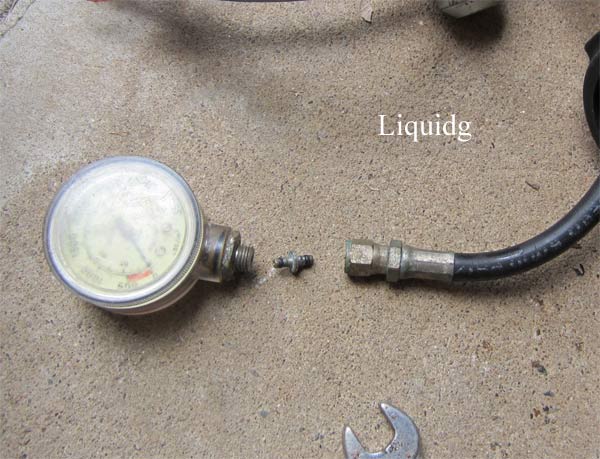 Take the O-rings off and copy their sizes.
Clean all metals with vinegar! 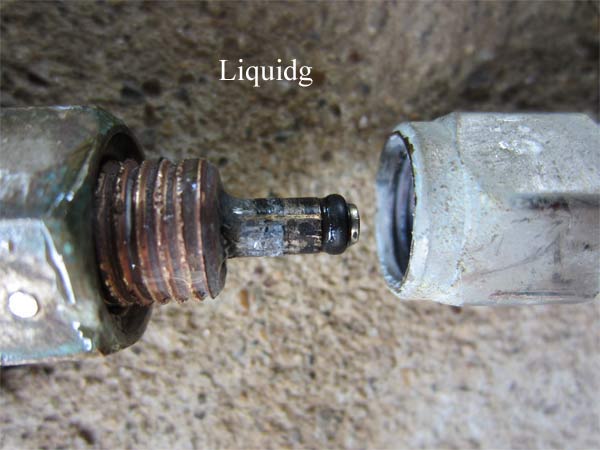 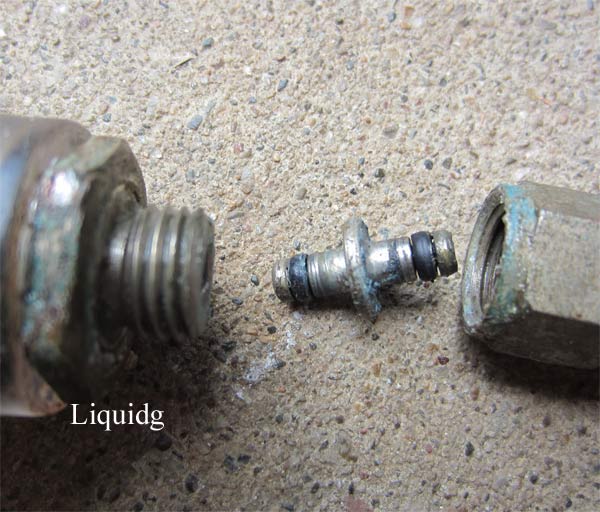 Apply silicon grease to everything, not Vaseline, it can explode under pressure.

Most times when you buy a dive torch and housing they come with seals/O-rings made from silicon.
To keep button o-rings healthy use fabric softener applied direct to the buttons parts inside the housing, I use a small spoon then use buttons to work in the softener. 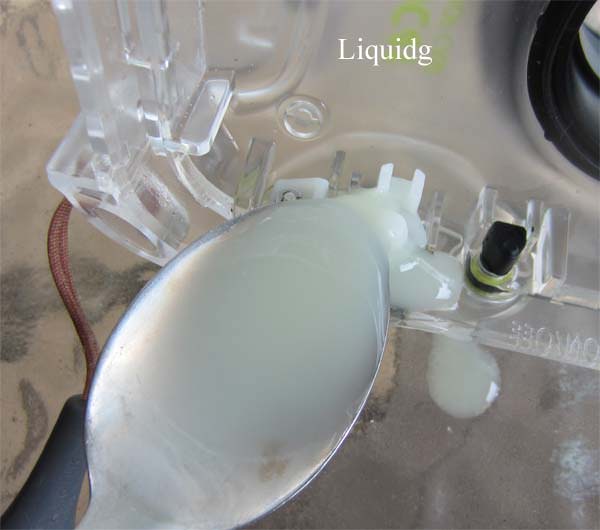 These are a serious risk to your equipment as they do not last, and in time, they will kink as you do up a thread or close the back of your camera and subsequently leak!
You can apply silicon grease regularly to your large visible O-rings and seals and have medium term luck, but you see the silicon will stretch and become loose and form a weak at best seal.

The best care for camera housing seals is gently take the seal off after each use and sit flat in a plastic bag till next time, this will allow the seal to remain its original size and never stretch and become loose.
no seal on housing 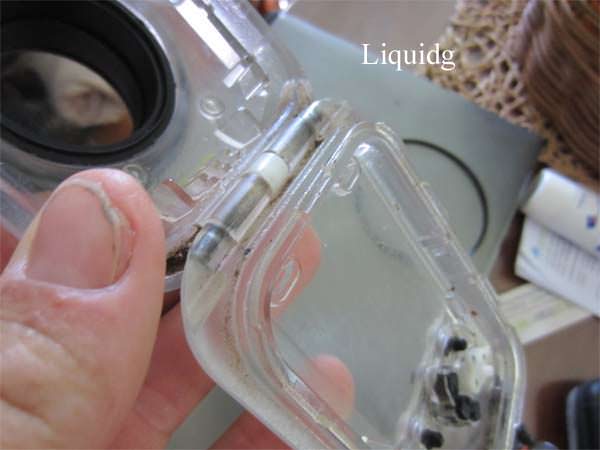 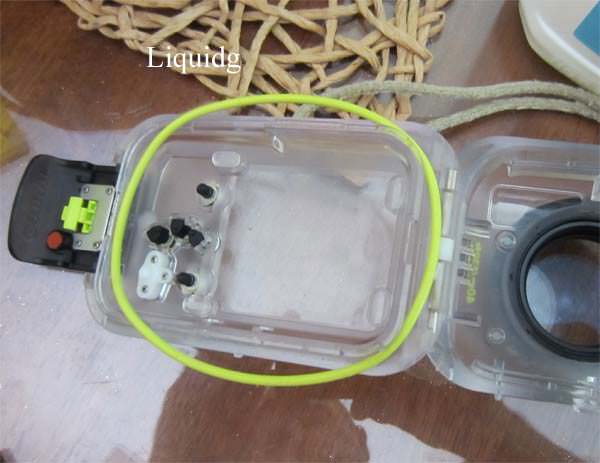 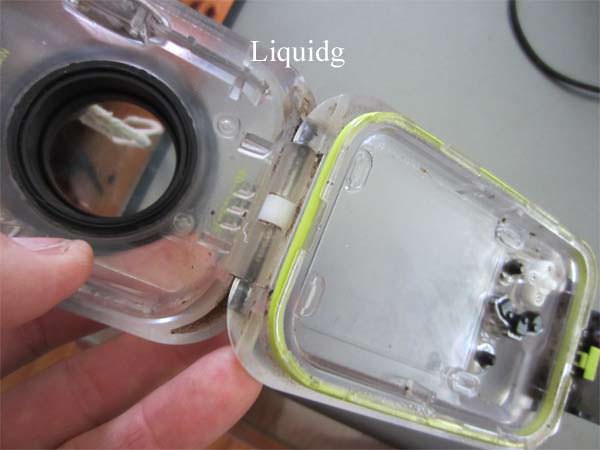 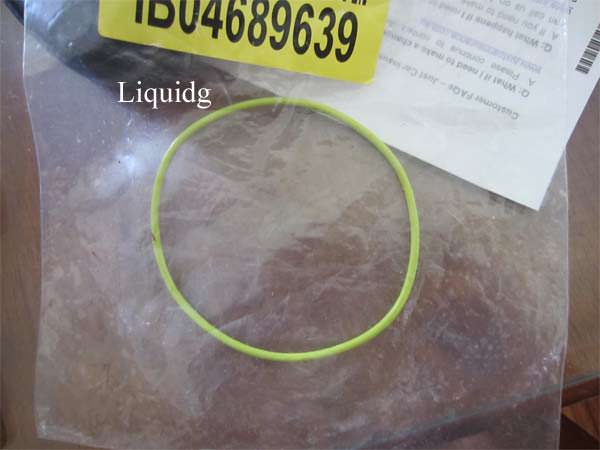 if you want to there are rubber o-rings to purchase on ebay for shallow pics and aquarium pics that is not suited to deep dives. 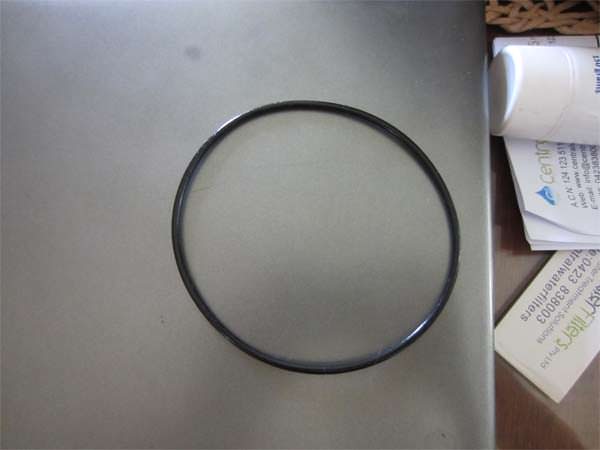 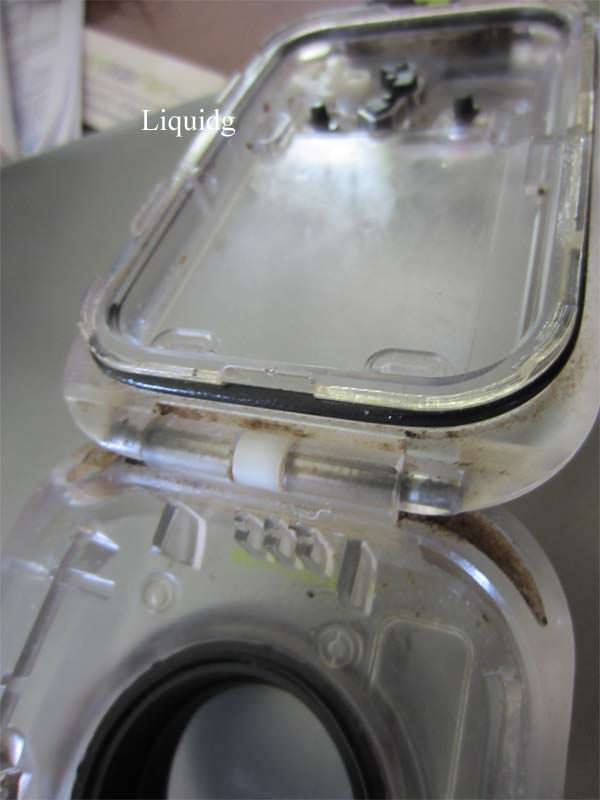 You can get black rubber O-rings for them, a mate uses them in his camera and it seals real well, but for me in deep water, I would not trust that large an area of black rubber.


Photo or video torch O-rings should be altered by removing the silicon types and replace with black rubber O-rings.
Here in Australia we get these in all sizes at a bearing supplies shops, you can buy O-rings in a box of varied sizes but these will not be the ones you want in your torch, the bearing supply shops can get the O-rings to the exact size you need to protect your torch.

So take in your torch and its original O-rings and the bearing shop employees will find the size you need by measuring and you closing the section torch over the O-rings till the right pressure is there giving the torch a great permanent seal.

Its important to remember that each time you pull your inflator house off the inflator or put it back on, you are potentially damaging the O-ring inside the hose.
You can replace the O-ring with trouble, but why not just apply a little maintenance to stop it from happening.
You can also take the corners, via fine sanding, off the inflators sharp edges, that can help as well.
I use food grade silicon grease on all dive gear metals. 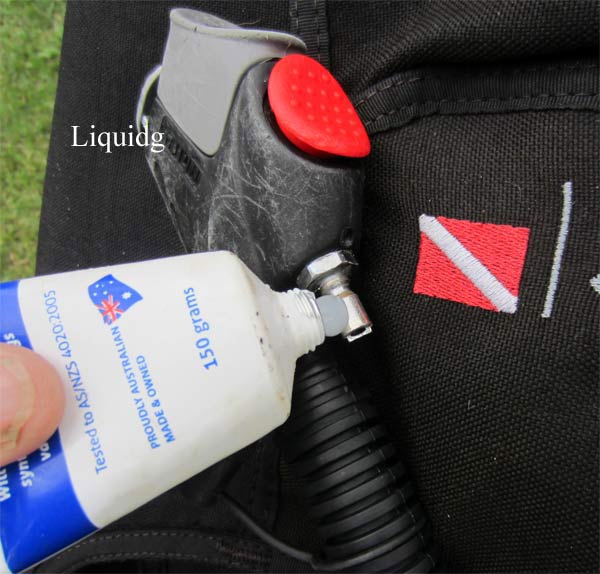 Re: Diver safety and dive equipment maintenance, for scuba or free divers.