Playthoa and zoanthids, the beauty and the deadly!

Playthoa and zoanthids, the beauty and the deadly!

This guy is part of what many reefers know are dam dangerous if not treated well!
This is a paly or actual name playthoa, it is part of the huge family of variations, at times, of absolute beauty!
The zoantharia group consists of amazing beauty more so with what we call zoas or zoanthids, there are some very colourful zoas!
But there is, what many reefers know of and that is the potential danger that comes with keeping these guys.
They carry with them what’s called palytoxins, and is one of, or is the most powerful non protein based poisonous substance on he planet!
It has been used to kill people and if not careful when handling them, once out of water, if not handled well, they can affect your sight or make you intensely sick in many ways or render you wishing you were dead!!
In the reef aquarium they are not good to have with out back up as they emit these toxins into the water when they want to, partly due to what’s called, coral aggression, to fight off other corals as all anems and zoas and all the rest of corals, are all corals!
They all evolved from jelly fish and in the tank, if they get stressed, they cause unbeknown trouble with out great care!
So with out algae to absorb these toxins in similar ways via osmosis as the oceans algae looks after the planet or with carbon or similar in the system to absorb these guys toxins, this is one of what kills most reef fish pets eventually unbeknown to that reefer!
Marine fish drink the water that they swim in and with the help a few organs like their tiny kidneys or ion pumps amongst their gills to take out the salt and recycle their pee giving them fresh water to use, the salt gets in through their pores and kills them, same as us if floating in the ocean for too long! So what is in the aquariums water, gets into their blood streams and this is what accounts for near all marine aquarium fish deaths, in one way or another, usually by their immune system shitting it self!
This is one of my carefully controlled group of palys. 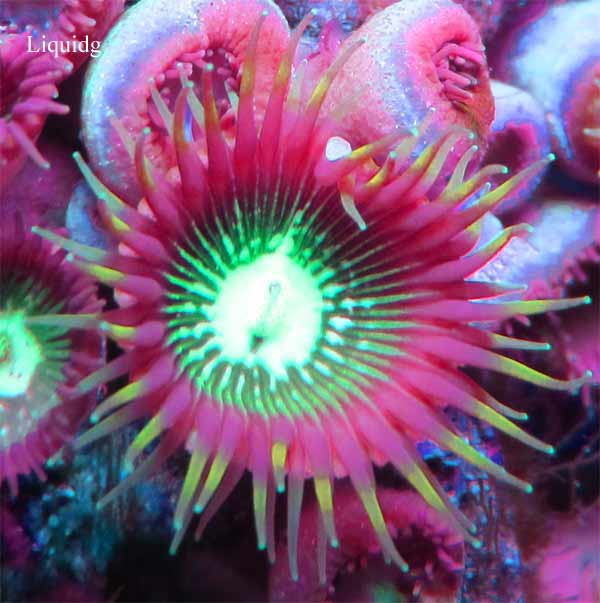