All fish with chaetodon at the start of their latin name are a risk to corals,which includes anemones and tubeworms.

All other fish featured here are a risk to tube worms.

Chaetodon auriga-thread fin butterfly fish.
A very common butterfly in the southeast, especially in the estuaries and sheltered reefs.
Easy to keep and harmless to other aquarium life forms. 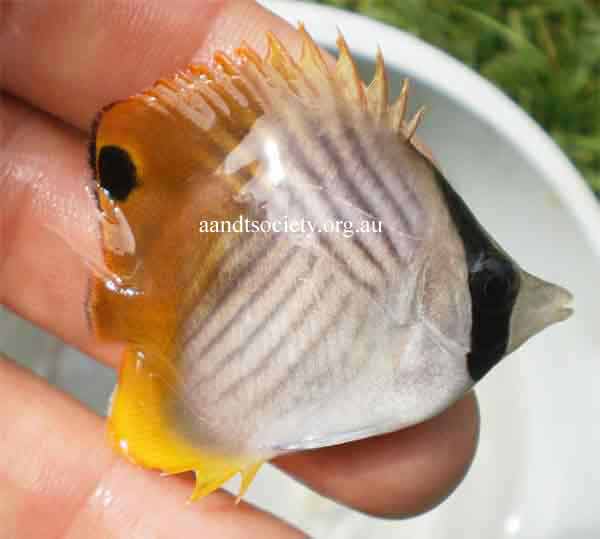 Chaetodon ephippium, saddle back butterfly.
A relatively common butterfly in the southeast, some are found in the estuaries and the greatest numbers are at sheltered reefs.
Easy to keep and harmless to other aquarium life forms. 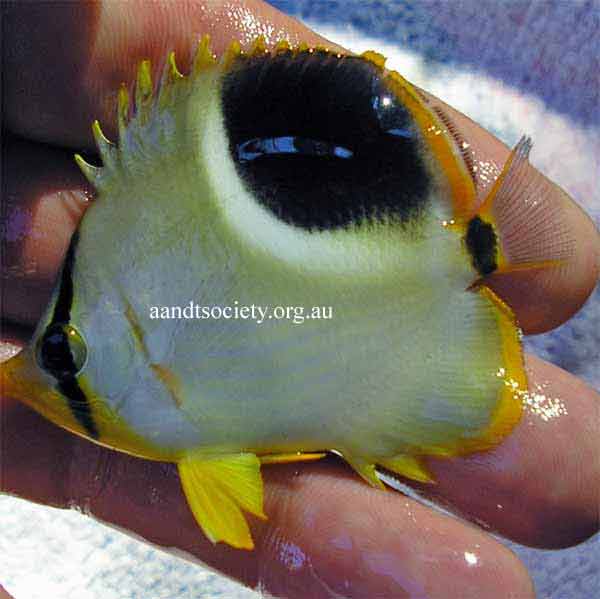 Chaetodon unimaculatus-tear drop butterfly.
A very tough butterfly and quite territorial to other chaetodons.
This one you have a fifty-fifty chance of survival with out corals in their diet.
Useless in a coral rich reef tank,in a fish only tank,they do extremely well if they can get past the coral flesh food needs. 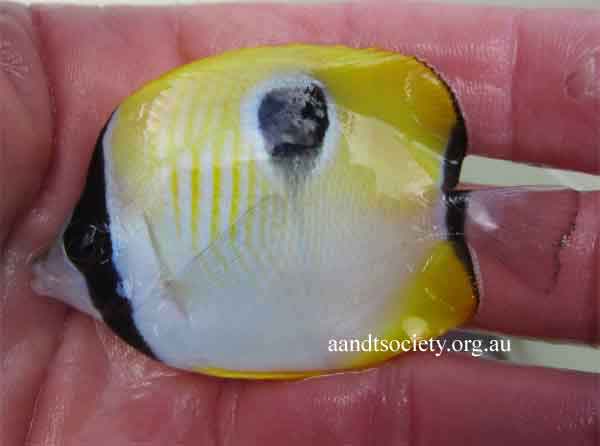 Chaetodon rainfordi-rainfordi butterfly
A very common butterfly in the southeast, always found with corals and the greatest numbers are at sheltered reefs.
Easy to keep and harmless to other aquarium life forms and serious coral eaters. 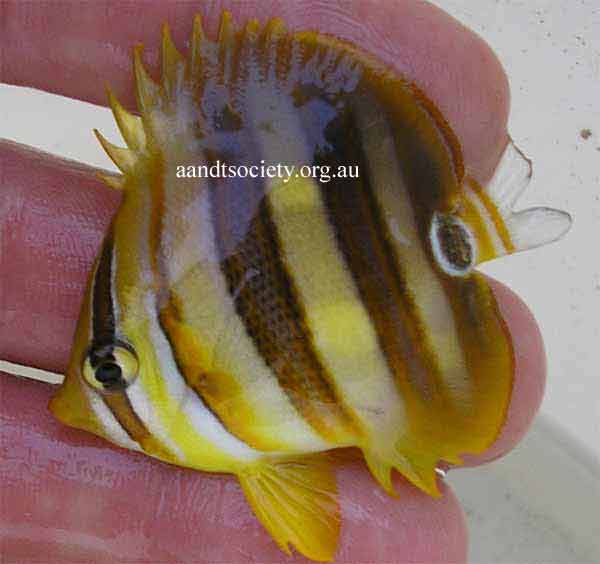 Chaetodon lunula-racoon butterfly.
A very common butterfly in the southeast, a very hardy fish found all over the reefs and the greatest numbers are at sheltered reefs.
Easy to keep and harmless to other aquarium life forms and do not need corals. 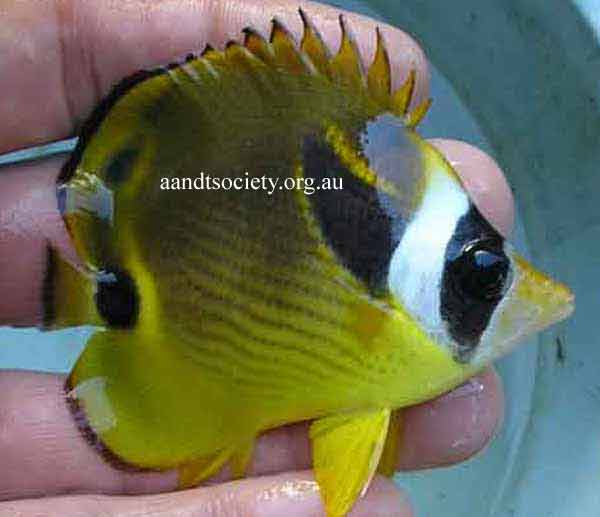 Chaetodon plebeius-blue spot butterfly fish.
A very common butterfly in the southeast, a serious coral eater and found all over the reefs and the greatest numbers are at sheltered reefs.
These will eat corals and 9 out of 10 may die if corals are not available. 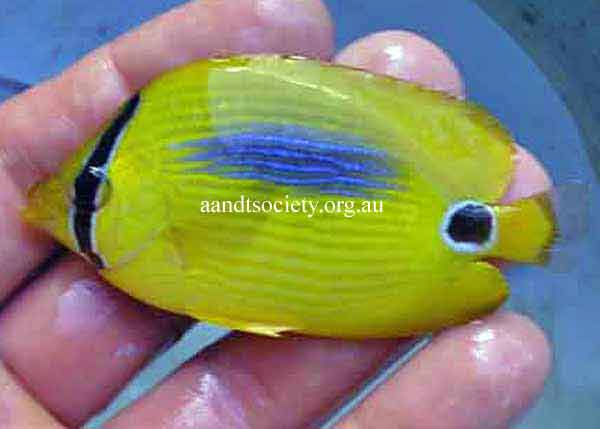 Parachaetodon ocellatus or ocellate butterfly fish.
This guy is not a chaetodon and will not bother corals making them reef safe and are of a calm nature and are not prone to any diseases beyond the usual!
Found quite common in the southeast and with a little care, they are easy to keep in a reef aquarium.
Provide sponges and small invertebrates and a mix or marine meats like oysters, limpets and muscles.
They are more common in estuaries and the calm side of islands with little to no corals, rather than the open ocean. 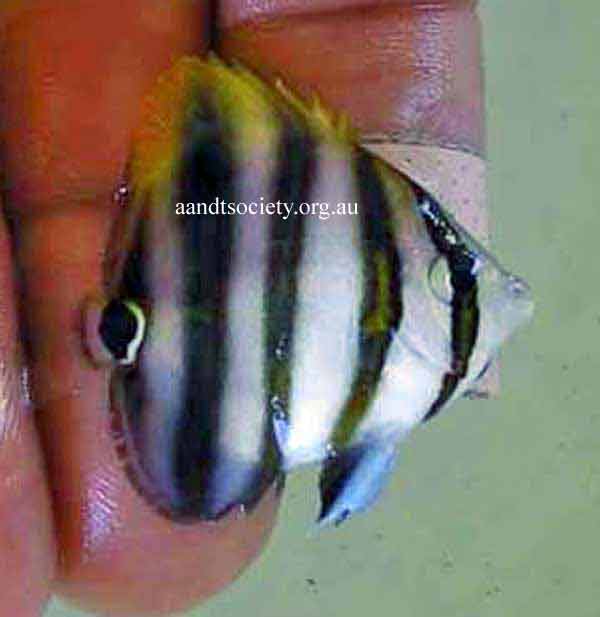 Chaetodon mertensii.
A very good fish in the tank though not overly common here and you can keep them with minimal damage to corals and they will feed quite well on all foods. 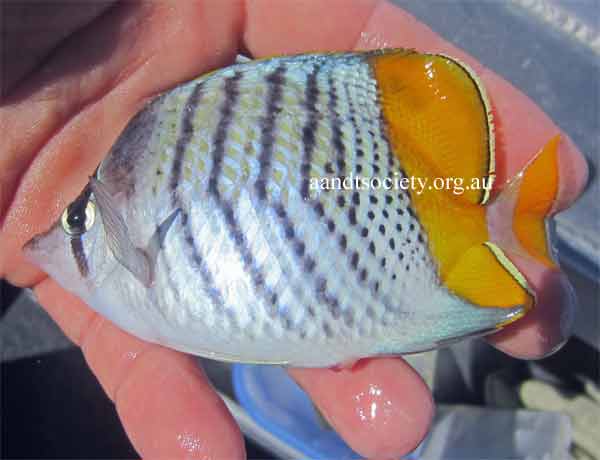 Chaetodon kleinii or sunburst butterfly fish.
A very common fish here in the south east and quite easy to keep though they can be quite territorial.
This one may bother your coral but will exist quite well on a varied diet. 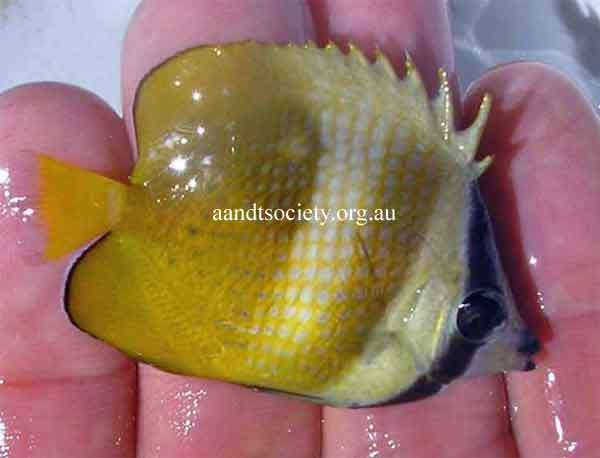 Coradion chrysoznus or high fin.
This common fish here in the southeast is a very easy fish to keep and does not bother corals at all.
It's main diet in the wild are sponges and small inverts, they will eat most anything in the aquarium you provide for food, though placing a little sponge in there to get them started couldn't hurt. 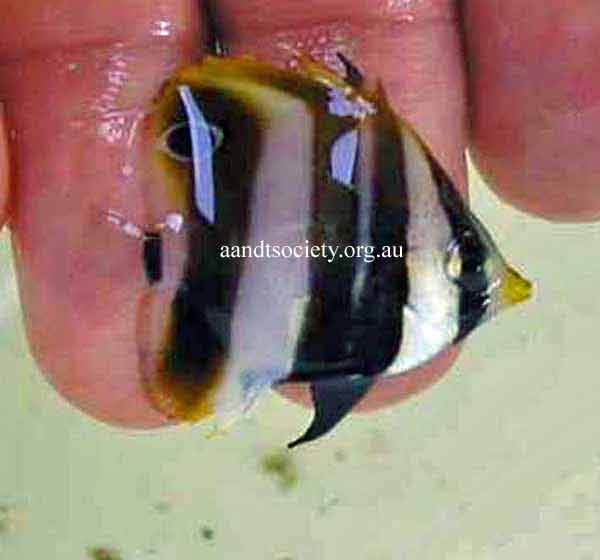 Chaetodon flavirostris or dusky butterfly fish.
One of the most common fish in the southeast and is an endemic species as well.
The smaller these fish are the harder they are to keep at the begining, though when you get them going they will readily eat most fish foods. [img] 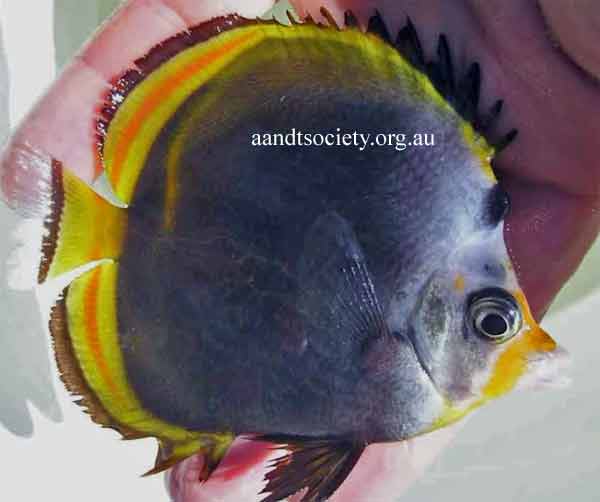 Chaetodon pelewensis or dot dash butterfly fish.
A quite common fish for the area and normally very easy to keep and feed though they will bother your corals.
These fish can be territorial. 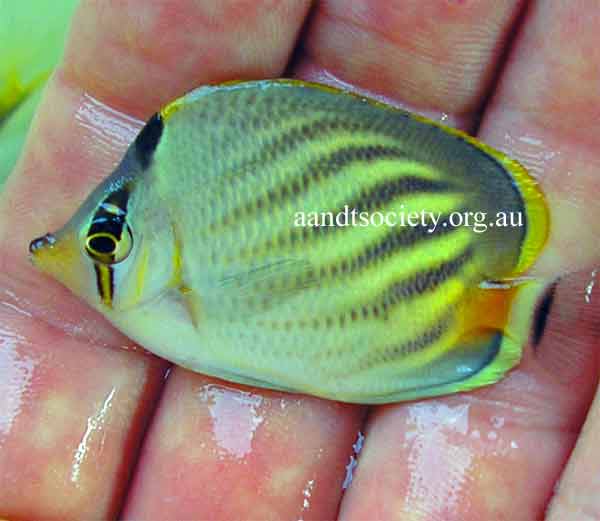 Chaetodon aureofasciatus or gold banded butterfly fish.
They are extremely common here in SEQ at two sites and a devout sps and lps coral flesh consumer, if kept with corals.
They can be kept with out corals as a food source by utilizing several foods groups including cunjevoi, dehusked peas, limpet meat, non cyano symbiotic spunges, spondylidae oysters, ulva and the usual reef fish foods. 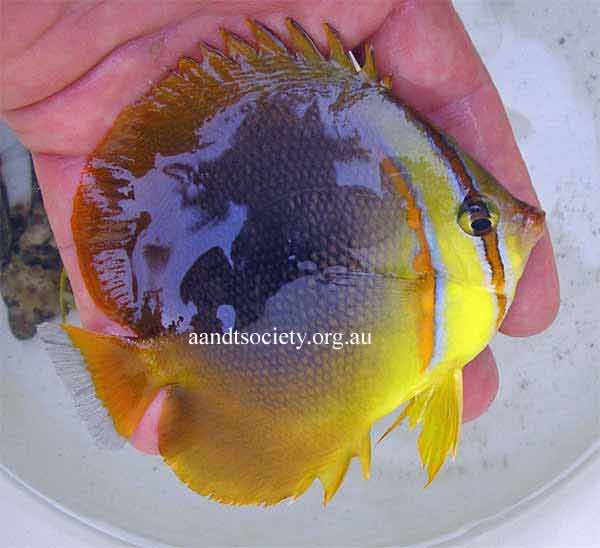 Chaetodon reticulatus.
A rare fish in the south east, but when you get one it’s a tough fish and gets on well with others. 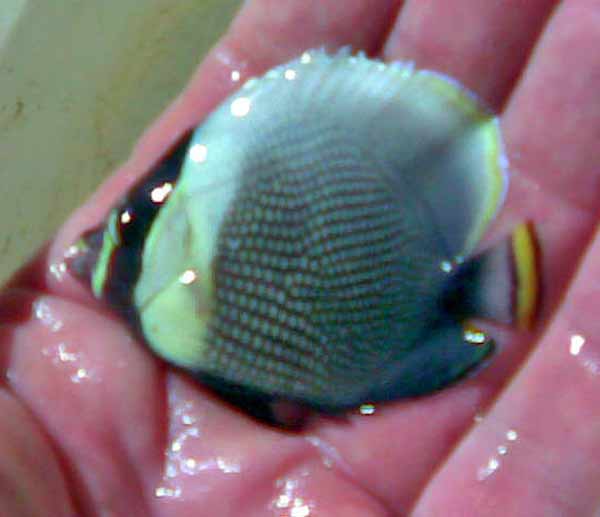 Chaetodon Guentheri.
A very common fish in the southeast and an easy fish to keep with or with out corals.
If corals are present you have a fifty-fifty chance of this fish bothering them. 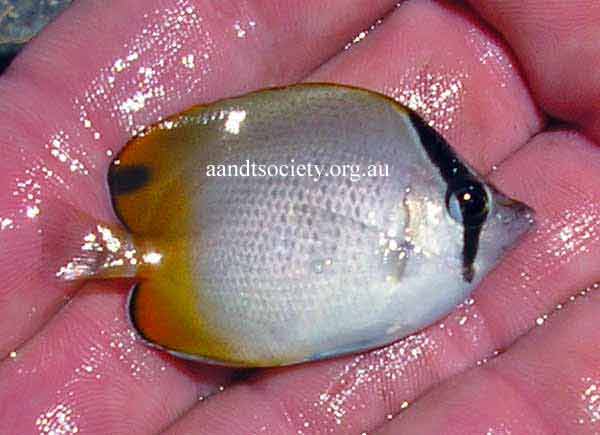 Chaetodon citrinellus.
An easy fish to keep with any other fish and will eat anything.
If coral is present they will annoy it quite a bit. 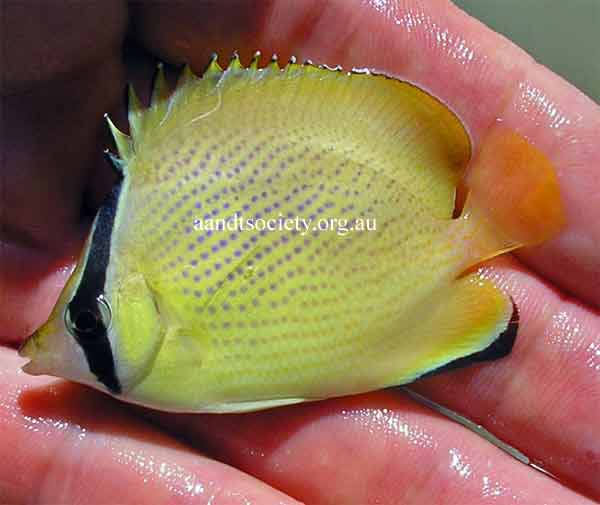 Chaetodon speculum
Not overly common in the South east,but when found they are a very hardy fish though will pick at coral. 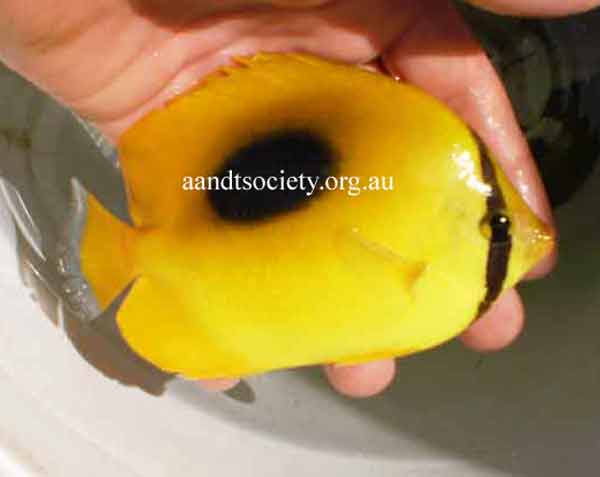 Chaetodon melannotus-black back butterfly fish.
Very common here and these fish will bother your corals.
A part from that they are harmless fish in a fish only aquarium and will normally do well with no coral in its diet. 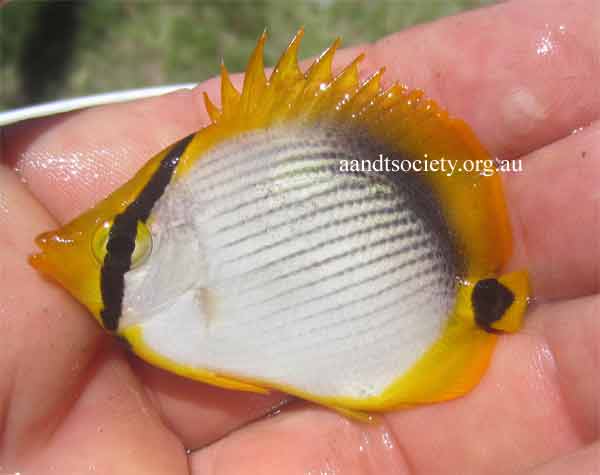 Heniochus diphreutes-schooling banner fish.
Extremely common in SEQ and very easy to keep on a mix of marine meats but may annoy corals.
In the wild they feed on zooplankton and benthic invertebrates and as juveniles will clean your other fish. 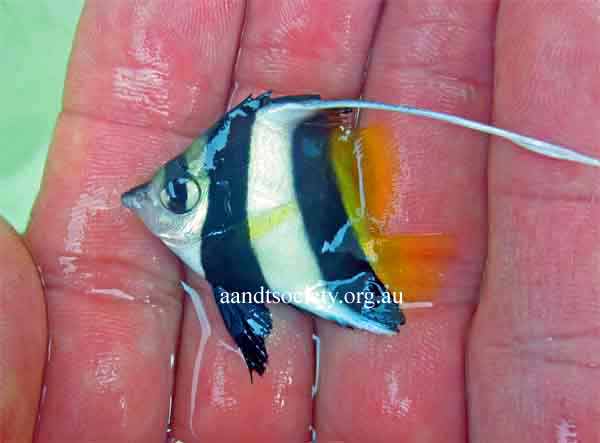 Heniochus monoceros-masked banner.
Reef safe,
Quite common in SEQ and an excellent fish for the aquarium, though they prefer temps below 25c.
Endemic to the east coast of Auz only,these fish eat any and all marine meats, are not prone to diseases and get on well with every one. 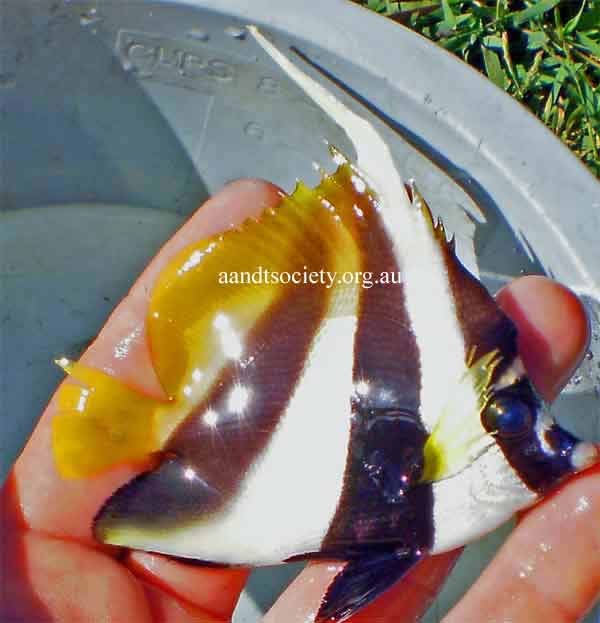 Heniochus chrysostom.
Rare in the south east and if found a very easy banner fish to keep. 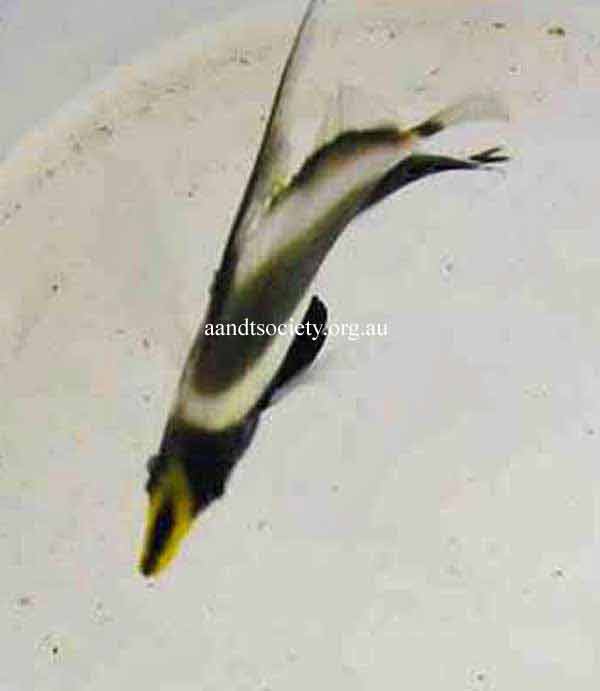 Forcipiger flavissimus or long nose butterfly.
These are not a chaetodon and do not eat coral, though eat inverts in the coral, the same with the copper bands, their long nose is for eating the little inverts from deep in the coral.
These are very common in the south east and easy to keep. They are found at 25 to 90 feet deep on average, though sometimes in very shallow water. 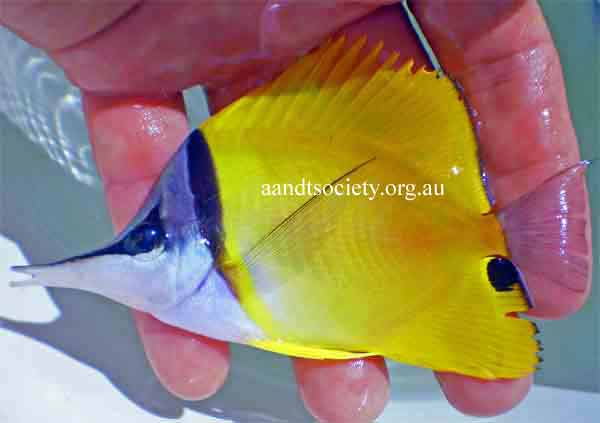 Chelmon rostratus-copper band.
A very common fish in SEQ,normally in estuaries and sheltered reefs.
Not easy to keep alive as they eat benthic inverts and similar. 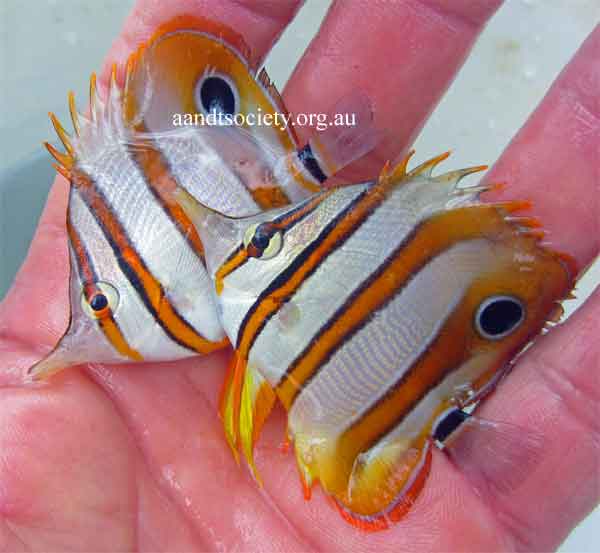 Chelmonops truncatus.
The black and white version of the copper band.
This member of the chelmonops family needs below 25c temps to survive. 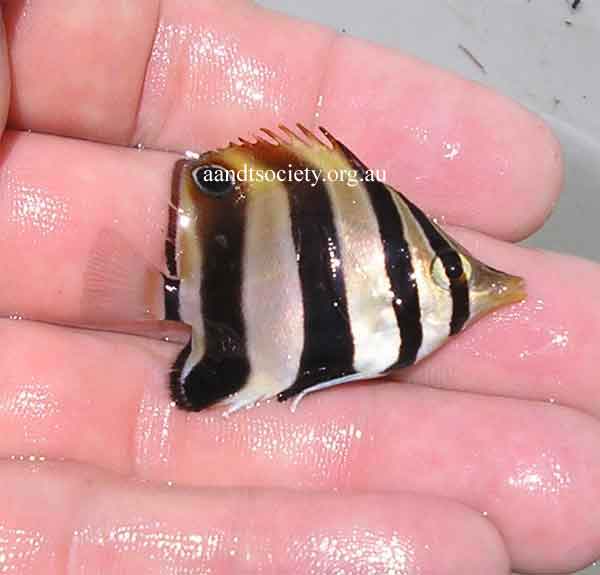 Zanclus cornutus-Moorish idol.
Very common in the SEQ and with a diet of de-husked peas, cunjivoe, and a mix of mussels, oysters and some sponges, very easy to keep, though it may pick at corals.
This fish is thought to be a result of hybridising from a chaetodon and tang. 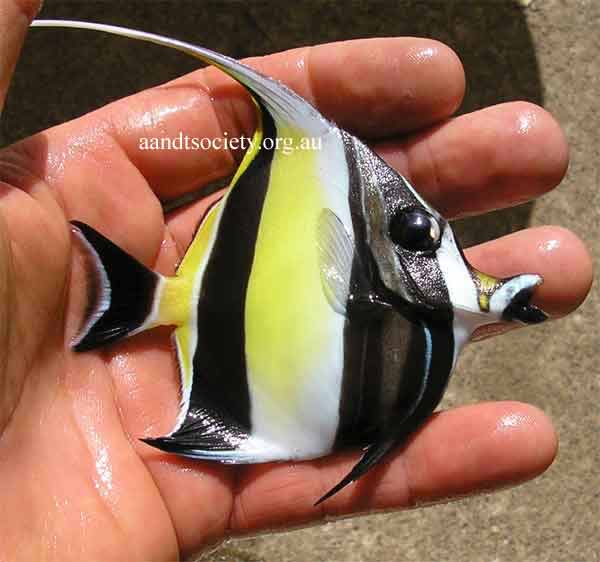