Other marine aquarium fish species found near Brisbane in SEQ.

Other marine aquarium fish species found near Brisbane in SEQ.

Always check with fisheries on what species and at what size you can keep of any fish or invert!

Pseudanthias cooperi-redstrip anthias.
Very common in the southeast in waters from 80 feet and deeper, though from time to time are found in shallow waters.
These fish eat any marine meats and need the same conditions as latezonatus, clarkii,conspicts and so on.
All these require temps no greater then 25c,hard water, low uvr and stable conditions

Pseudanthias sqamipinnis-common anthias
These are found in most areas of SEQ in a school situation with a territory and when numbers require it,an orange female will turn to a pink male.
Easy to keep when not stressed,they need very regualr tiny feeds of marine meats due to being plankton or other small fish and shrimp dependant.
Male

Pentapodus sp or blue wiptail.
Very reef safe
Not overly common anywhere really and not much info on these very pretty fish though a few are found in open ocean or estuaries.
These gorgeous guys that are sickeningly harmless, have no name at this stage due to confusion in the past and currently of them possibly being the emervii, which it is not!
The difference is very obvious but what can you do, it may be named one day but as yet this little auzy is a fish with no name, lol.
The first time I kept one of these fish was at least 30 years ago, it is in an old video I have of my first actual reef tank, but through all these years I have never been able to keep one for more then a month or so!
I see one here and there and they are quite common at most sites and in quite shallow waters as well, just hard to catch and find once they take off or see before they hide.
They live in certain environments that they use very well for cover.
You see them in the shops at times, well I have only seen them in Pet cities tanks but they must be elsewhere at times for sale.
If they can jump out if nasty fish are there they will, if any fish have attitudes they get bullied and fin nipped to death, if anything in any way is potentially nasty, “they die”, that’s why their full size of 7 to 8 inches, I have never seen!
They eat anything you give to them and harm “nothing in any way”, they are the true food chain fish.
Most whiptails are just that and the fillets or whole are great for bait, but these guys are the extreme of this!
I was a bit worried it was growing to fast for my tanks but it has slowed now I have control of my tanks temperature.
If you ever see one for sale, if your tank is filled with harmless life, get one, so pretty, they are always visible and so harmless. 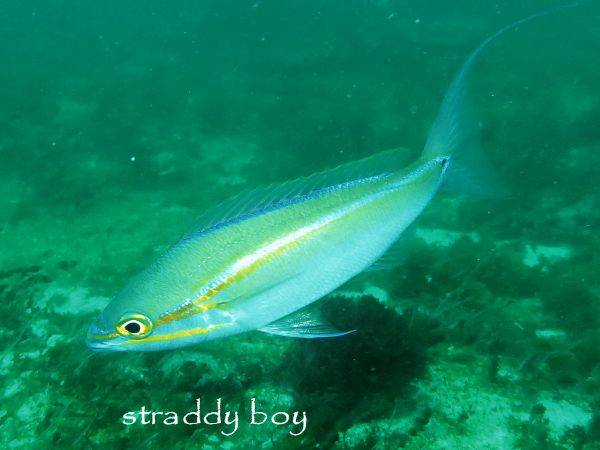 Diploprion hifasciatum or soap fish or yellow emperor.
Very common little predator in the south east and a very easy fish to keep.
Will eat fish and shrimp up to three quaters of its size and is very fast at this.
Not a good fish to have if not a part of a predator tank or similar.

Amblygobius phalaena and a Istigobius decoratus goby.
Both of these fish are extremely common in the southeast and feed on a diet mainly from the substrates surface of small inverts.
Apply some fresh marine meat foods and some feeder shrimp such as krill and they will settle in nicely and really on totally fresh marine foods.
They are harmless to most others except there own kind and like to live in pairs.

Valenciennea longipinnis or tear drop goby.
Very common in SEQ in estuaries, behind islands and in rock pools.
They require the same care as any sand sifting goby.

Valenciennea Helsdingeni black line goby.
This one is a little different to the actual helsdingeni! This slight colour morph, is a bit rare. Tough easy going fish and does not need to sand sieve and it only dies from high temps or jumping out.

Trachichthys australis or roughy or soldier fish.
Found only in east ausy waters from the early parts of the barrier reef to the great Australian bite,very common in the south east.
A tough harmless fish that though hard to start it feeding is an easy fish to keep remembering it likes a place to hide out of the light and temps no greater than 26 degrees.

Cleidopus gloriamaris or pinneapple fish.
Very common from south barrier reef to victoria than from albany in south WA north to geraldton.
Not an easy fish to start feeding unless using tiny inverts as they feed of a night on planktonic to small shrimps mainly.
The left and right name refers to the utilized bioluminescent bacteria lighting they have just under each eye to aluminate the waters at night to hunt for and attract planktonic life to feed on when small.
As they get bigger, they feed on more basic small shrimp and to a less a degree, fish as well.
The variations of this fish consist only two types in the world and the one pictured is our endemic species to Auz and are a popular catch for the over seas commercial market.
You always see some around wrecks at night like heaps of little head lights,a very common fish here in the south east

Brachaluteres-pigmy leather jacket. This is the one we see here regularly, the golden brown sometimes, but the green more often the any other colour variation.

Cirrhitichthys falco or pixy hawk.
A very common and equally easy fish to keep on most foods with some marine meats in it.
The pixy is part of the aggressive hawk family but is normally not much of a problem to most tank fish and inverts that are not very small.

Scolopsis bilineata or monocle bream.
Very common in the southeast.
These are a very easy fish to keep in the aquarium and as an adult are very pretty.
They will eat your small inverts.

Bodiamus mesothorax or black belt hog fish.
Quite common the south east up through the barrier reef.A very easy fish to keep on an invert and other marine meats diet.These should not be trusted with small inverts.

Solonostomus paradoxus or harlequin ghost pipe fish.
All pipe fish and sea horses are not allowed to be collected, check regulations on that.
This one was after it was found dead on the shore line.
Very common in river mouths and non-surge reefs in the southeast from January to April.
These need the same care in the aquarium as a sea horse.

Doryrhamphus excisus-pipefish.
Very common in estuaries in SEQ from December to March if no rain events kill them.
An easy pipe fish to keep on similar foods suited to sea horses.

Largest of all angler fish

Synodus variegates or lizard fish.
A very fast predator, that is patterned with 8 to 9 bars usually and there are 13 species of this type of fish. Full size is just over a foot in length.
Very common in SEQ and not reef safe but make an excellent addition to predators tank.

Datylopus datylopus or Fingered dragonet.
Not an overly common fish in the south east but we find a few here and there.
With an established tank and lots of foods such as krill and other feeder shrimp combined with most fresh marine foods they are easy to feed.
These fish will try to jump out so that should be remembered if getting one of these rare fish in the shops.

Neosynchiropus ocellatus or dragonet.
These are very common in shallow reefs not in swell afected areas.Though very harmlees in a reef tank they can be a bit fussy in what they eat in the same ways of a madarin fish.

All sweet lip have a legal size for them so check on regulations.
Plectorhinchus chaetodonoides or clown sweet lip or harlequin sweet lip.
Not overly common in numbers, we find a few each year in the south east and they are found nearly all over the tropical pacific waters.

Very common at in shore reefs and estuaries at this stage of growth from December to March in SEQ.

Balistoides conspicillum or clown triggor.
Quite common in the south east and most of the tropical pacific areas. Very easy to keep on a mainly invertebrate (crabs, shrimp) diet.
These are of a nasty nature normally and should not be kept with weak varieties of fish or any inverts really and most certainly not in a reef tank.

Adult living with an imperator
https://www.youtube.com/watch?v=mDbTV5P9cWY

Pseudobalistes fucus.or yellow spot triggor.
The same as the clown trigger in every way other than colour.

Enneapterygius atrogulare-dragonet or three fin.
Extremely common in SEQ in depths of 1 to 3 meters of water,will feed easily and coexist nicely in a reef tank.

Goat fish, one of many variations.

Pervagor malenocephalus or file fish.
Extremely common in SEQ and they do very well in reef aquariums on most foods, thought they will eat annoying and valued invertebrates.

Centropogon australis,eastern fortescue.
Very common in SEQ in estauries,rock and mud pools on the protected side of islands and in bays.
Easy to keep.

Scorpaenodes sp-scorpion fish.
This exact colour I have not seen before yet all scorpion fish are very easy to keep if started like a lion fish then pass onto dead foods.