Lion fish and scorpion fish found near Brisbane in SEQ.

Lion fish and scorpion fish found near Brisbane in SEQ.

First and foremost, do not use freshwater fish or inverts as their main food source for any length of time due to detrimental bacteria from these feeders.

All in this thread which includes lion fish and leaf and more, are all of the Scropaenidae family or scorpionfish.

The aquariums waters should be at temps of around 23c to 26c and no ammonia or nitrite should be present.

There needs to be places for them to feel as if they are hiding and out of the strong light or it may harm their eyesight.

They also prefer low over all current in the aquarium to hunt easily.

Be careful placing similar lion fish species together as they may fight for territories.

With all lionfish the time spent getting them to except frozen foods is the hardest part of their care.

These foods can be sourced from bait shops(make sure these don't have added chemicals) the best is large frozen krill from the aquarium shops.

With the lunulata and volitans and they look quite similar, they will go to frozen quite quickly as this process with them isn’t that hard to achieve.

Try placing a length of wood like a kebab skewer that looks like a huge tooth pick in the tank with a frozen fish or shrimp on it in front of the lion fish to get it to take the food, this works with patience and then onto them waiting at the surface when they see you to get the frozen foods.

Live fish and inverts as feeders for lion fish are readily available near open ocean or in open ocean rock pools.

The near open ocean means bay and estuaries.

In the bays look for drains or pools at low tides that are normally brackish to full salt water, these have abundant small fish and shrimp in them and with shrimp traps you can collect quite a few.

This pic shows the difference between zebras and the antennata lion fish species. Zebras left and right, antennata in the centre! 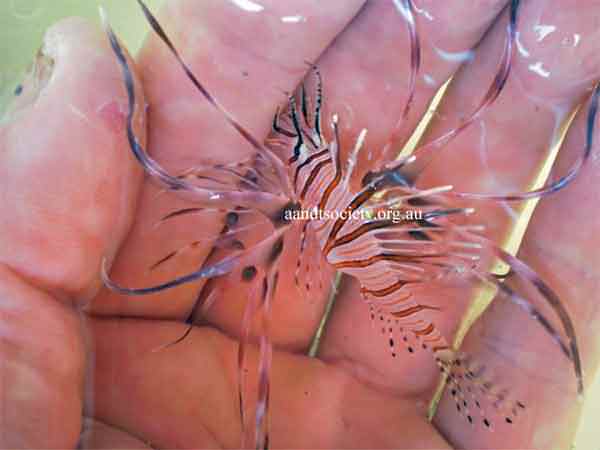 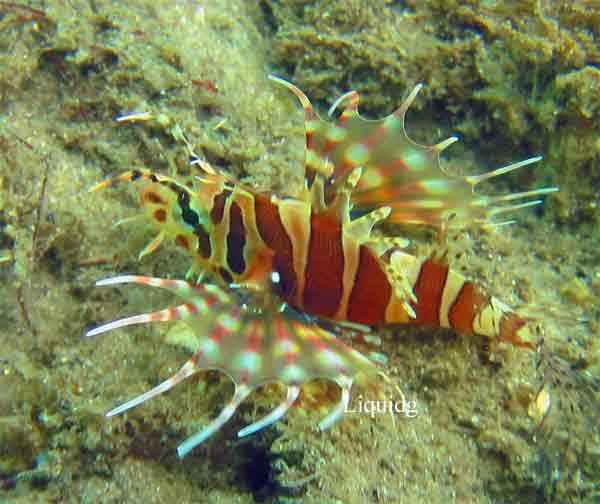 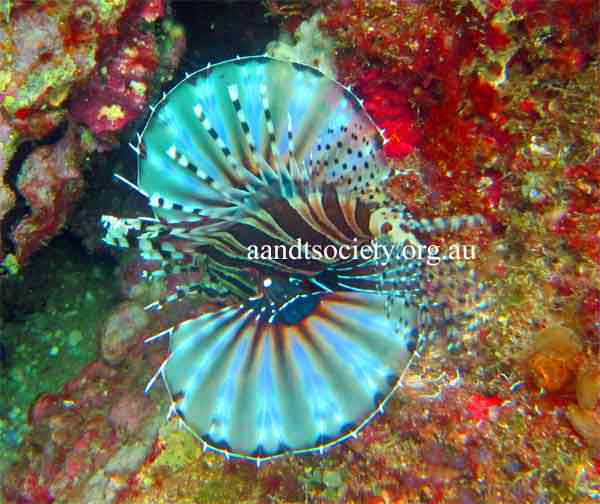 Pterois antennatta.
This lionfish and the only one of this family has a potentially fatal sting and should be handled very carefully! 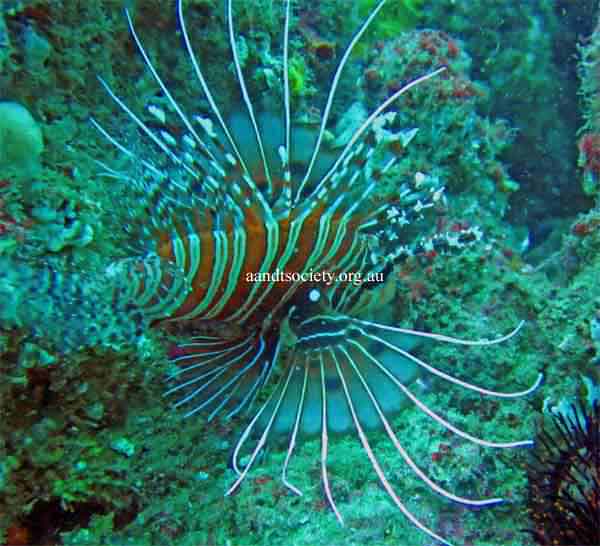 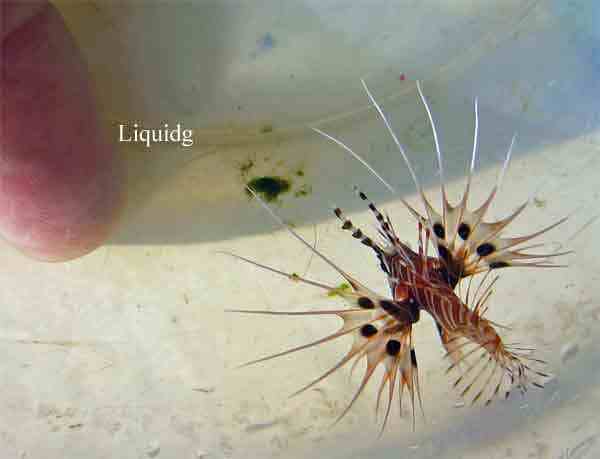 Video of juvenile in the wild
https://youtu.be/833dZfpWgSQ 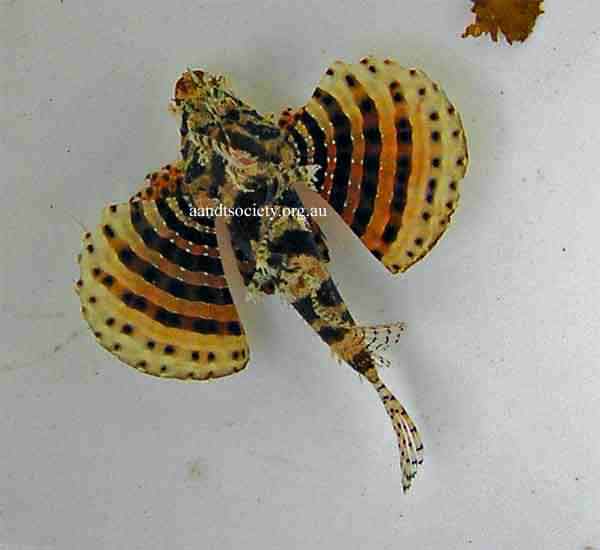 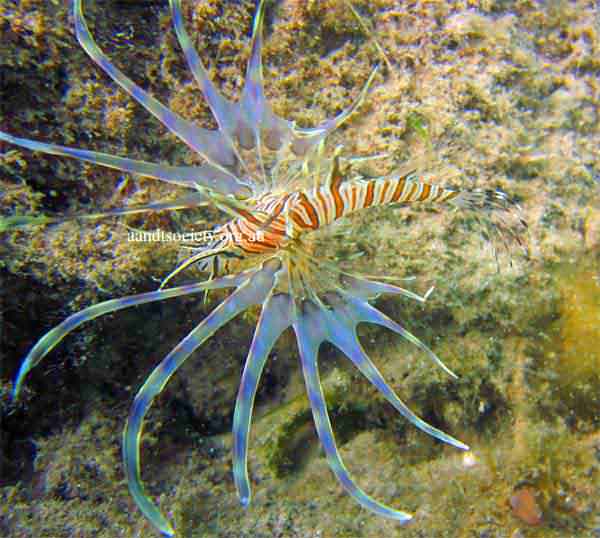 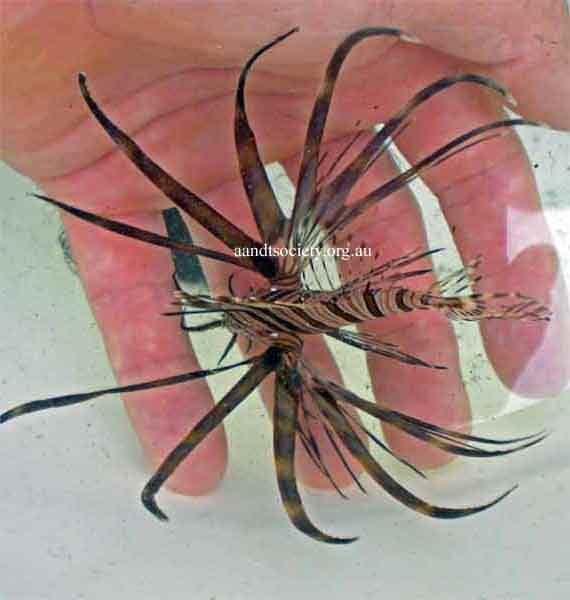 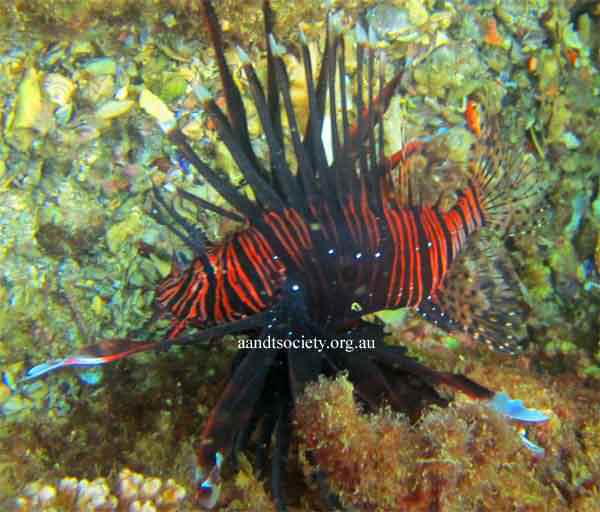 Pterios lunulata.
Unlike the volitans this guy has very short horns near its eyes. 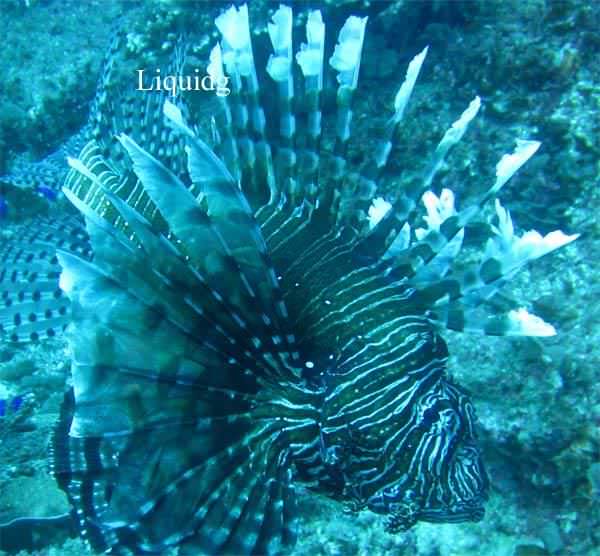 cockatoo and a small leaf fish 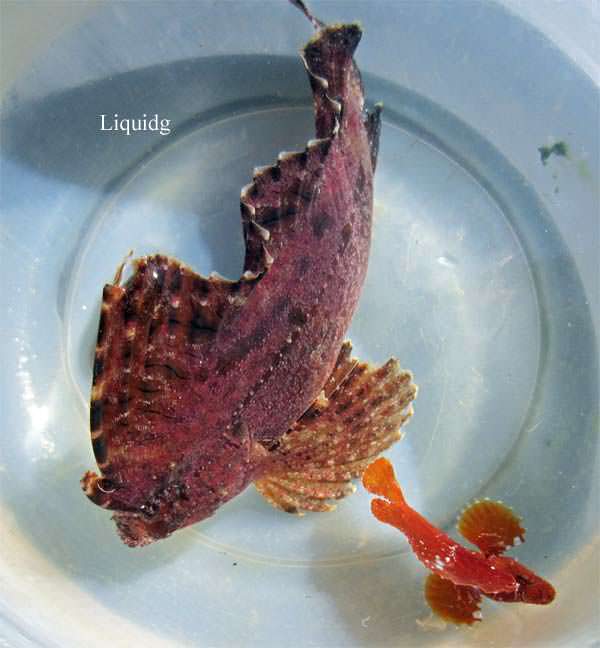 leaf fish straight from the ocean living at a coralline wall, hence the colour 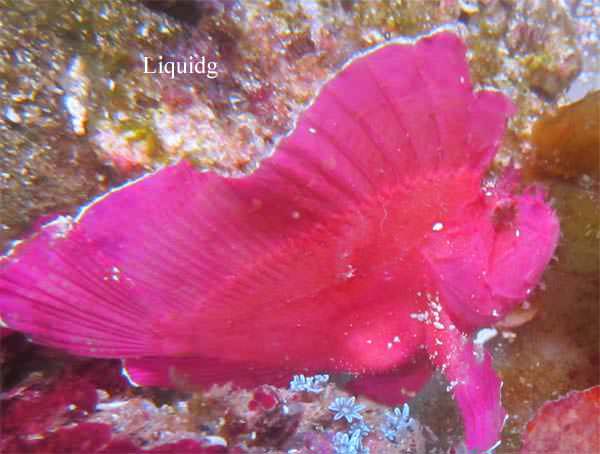 once in the aquarium the colouration alters 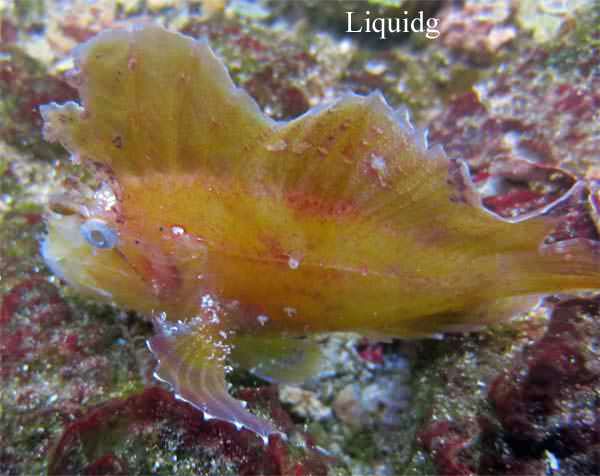 Cockatoo wasp fish
in the wild 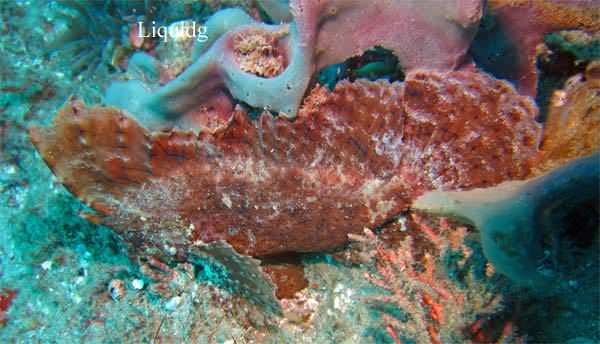 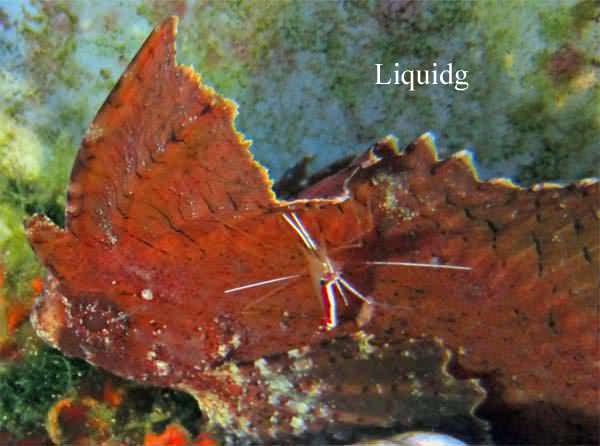 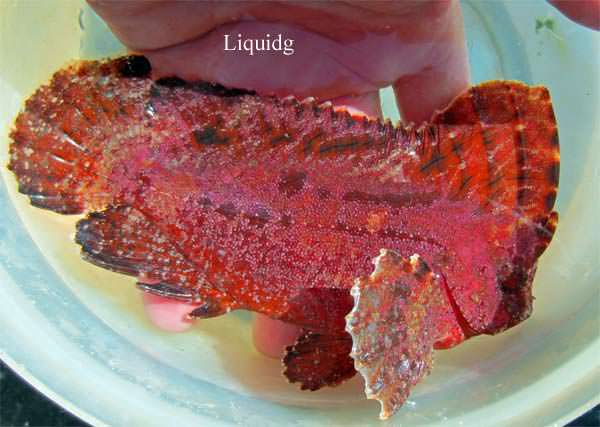 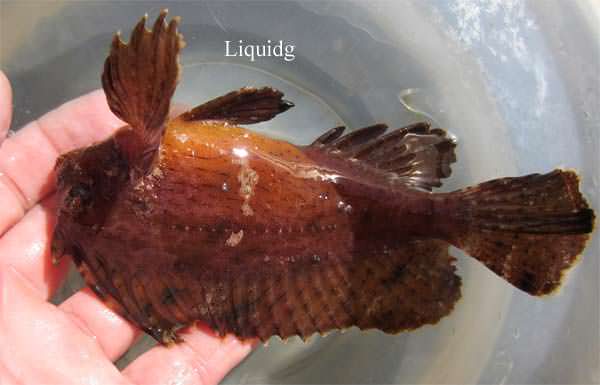 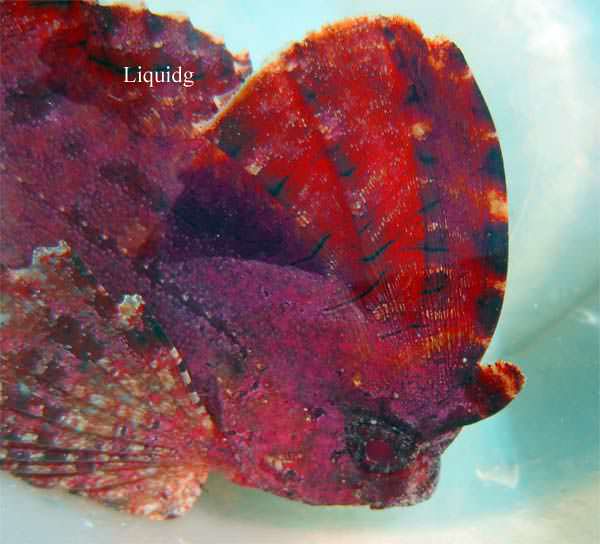 both in the aquarium 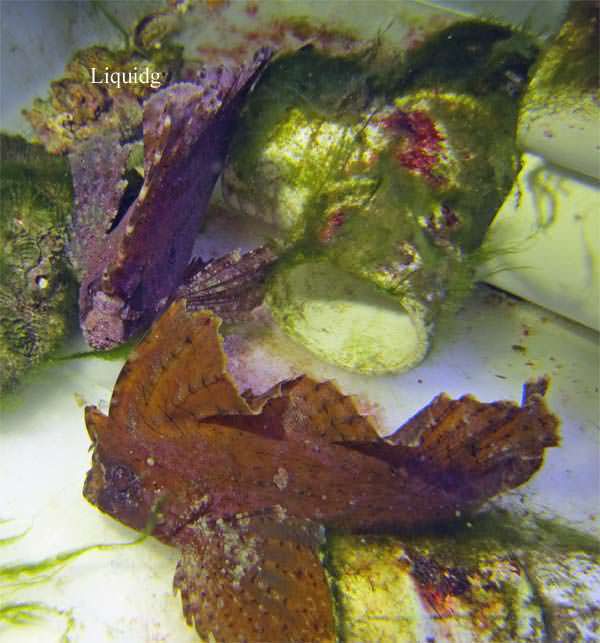 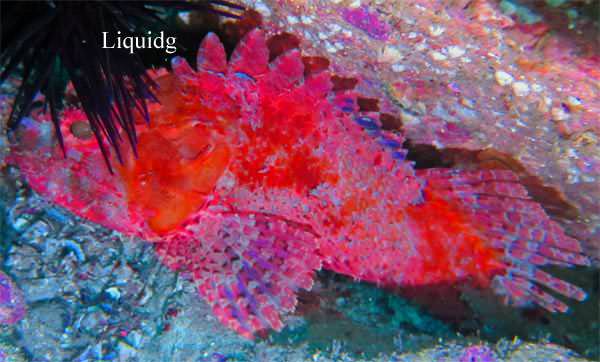